According to Cambridge Dictionary, doxing (or doxxing) is defined as “the action of finding or publishing private information about someone on the internet without their permission, especially in a way that reveals their name, address, etc.” Doxing may be carried out for law enforcement reasons, as well as being used to harass or victimize people. Meanwhile according to a Chen, et al. (2018) Doxing is the searching for and intentional disclosure of private information about a particular individual on the Internet without his or her consent, and is often used to exact punishment. Doxxing is a clear breach in personal privacy, aiming to distress the target. It is a form of online violence and abuse, and it can cause the victim to be vulnerable to personalized attacks from online targeting to real life harassment. 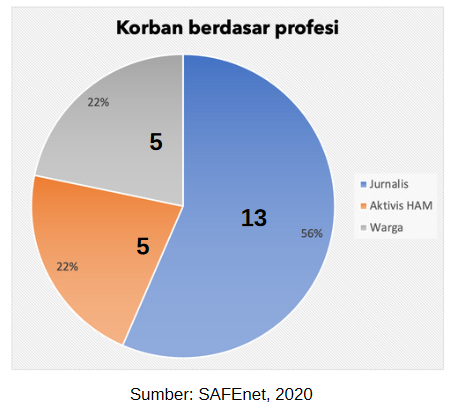 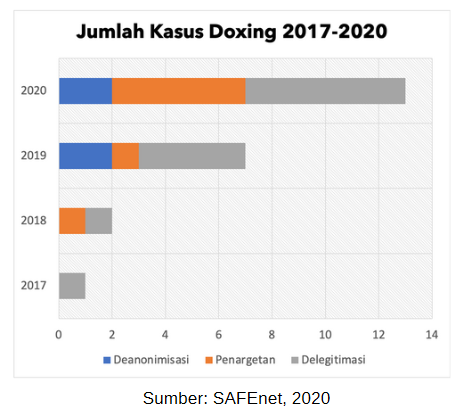 In Indonesia there has been an increasing number of doxing cases year by year, as shown in the graphics most cases are dominated by delegitimization and targeting type of doxing. And as seen in the pie chart, doxing cases happen to people with a certain occupation which is mostly dominated by journalists and human rights activists in the second and the rest are just regular citizens. This seems to happen because many cases related to some political issue which are brought to the public by these victims consist of journalists and activists.

There are three types of doxing, namely: deanonymization, targeting, and delegitimization. (Douglas, 2016).

In order to minimize doxing actors using personal data to attack you, it is important to check and manage your personal data spread on the internet:

However, despite the harms, doxing is sometimes used to expose harm done in the community. For example, Chinese internet users once released evidence of private and public transgressions and wrongdoing of their government. They launched the documents listing travel expenses for research trips, providing evidence that public funding had been used to pay for trips to tourist attractions. So, is doxing justifiable in certain circumstances?

In his paper, David M. Douglas argued that doxing may be acceptable depending on the rationale for anonymity and if a compelling public interest justification for revealing one’s identity is present. He also claimed that delegitimizing doxing might be permissible if it exposes evidence of wrongdoing (such as deception, abuse, and other human rights violations), but only if the information released is necessary to proof that the wrongdoing has happened and if it is in the public interest to reveal such wrongdoing.

Aside from David’s opinion, it’s important to think about how power dynamics play in every abuse situation. A case where a sexual harassment victim shares their abuser’s profile is clearly different from a case where person A shares person B’s (who’s a stranger) profile to enable people to bully person B. Overall, as an internet user, we have to be wise and be as kind as possible.

The internet is a public space, which is why we should be careful when putting our personal information in the cloud. Our attitude in using the internet can also affect on how likely we can be targeted to be doxxed. There are cases where people getting offended in the internet trying to attack back by doxxing the ones who offend them. That’s why in addition to the points mentioned above, to prevent doxxing we should also keep in mind on how we behave in the internet.